We asked our developers, who to follow or what to monitor on social networks and where they find new tips and current topics in their field of interest. Based on their references we compiled a following** list of interesting people and accounts** of various PHP frameworks or debating communities for selected social networks:

Facebook is designed more for entertainment than professional discussion. However, there is one active group where you can discuss topics about your field of interest:

Communities to join on Google+

Do you use social networks? Which ones? Do you miss someone or something in the list? Feel free to discuss it in comments.

Today I want to show you a new feature of ORM Desigener for Doctrine ORM. It is an ability to define prefix for a whole module by which ORM Designer exports every entity with a name composed of this prefix and stand-alone name. In the past we received several requests from Zend Framework users for this feature, so here it is ;-).

And how does it work? Here is a screenshot of an example model: 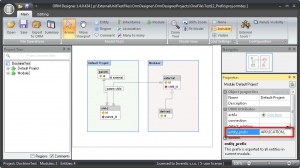 In this model we’re using simple and nice entity names like “parent” or “child”. To “entity_prefix” attribute of each module we enter common prefix for all entities. After that when we export the model to the YAML file, we get a following result:

I hope this function will help you a bit more with you everyday work ;-)